Click here for a video
The Disney Fantasy’s horn is quite the musical talent. It’s able to perform not just the first musical line of “When You Wish Upon a Star” but also the second line of the song (“makes no difference who you are”) plus, several measures of “Yo Ho (A Pirate’s Life for Me),” “It’s a Small World,” “Be Our Guest,” “Hi Diddle Dee Dee (An Actor’s Life for Me)” and “A Dream is a Wish Your Heart Makes.”

The characters Dumbo and Timothy on the Disney Fantasy’s stern weigh in at more than 2,300 pounds. Dumbo is a little over eight feet long from head to tail with an “ear span” of seven feet. Timothy sits 2’6” tall on Dumbo’s hat and is holding a paint brush that’s about 3’10” long. Dumbo was sculpted from large foam blocks by Walt Disney Imagineering artists in Glendale, Calif. The sculpted pieces were then shipped to Florida where Disney craftsmen and artists created him in fiberglass and paint over a frame of marine-grade stainless steel. The duo was installed in Papenburg, Germany.

Looking upward in the ship’s atrium lobby brings guests eye-to-crystal with a glowing piece of “Art Nouveau-inspired jewelry” – a cascading chandelier flowing downward from a massive, illuminated stained-glass flourish on the ceiling in peacock hues of greens and blues. The chandelier itself is more than 10 feet in diameter, a one-of-a-kind work of art evoking a peacock in stained glass and more than 60,000 clear Swarovski crystal beads.

Every Disney Cruise Line ship has an atrium lobby statue celebrating a classic Disney character. The Disney Fantasy’s bronze-cast pièce de résistance is Mademoiselle Minnie Mouse, dressed in vintage fashion with a parasol and steamer luggage at her side – inspired by travel of the 1920s and 1930s. She will be the subject of as many memorable vacation photos as her counterparts: Mickey at the helm (Disney Magic), Ariel sitting pretty (Disney Wonder) and Admiral Donald striking a pose (Disney Dream).

Sips, sights and sounds of the diverse cities, countries and cultures of Europe – that’s what’s in store all in one evening and all in one place aboard the Disney Fantasy. The adult nightlife district Europa features five clubs and lounges that treat the senses to a taste of Ireland, England, France and Italy plus stunning skylines and signature cocktails inspired by Russia, Greece, Hungary and Spain.

Two huge mosaic walls based on the Disney•Pixar animated film “Finding Nemo” are showcased in Cabanas casual-dining restaurant. Created for the Disney Fantasy by Italian artists, each wall is more than 25 feet wide and more than 8 feet high and contains approximately 194,500 tiles in 200 colors of hand-crafted Venetian enamel. A team of nine artists created the mosaics based on Pixar designs depicting the underwater world of Australia’s Great Barrier Reef and characters featured in the motion picture. While similar scenes also appear on the Disney Dream, Walt Disney Imagineers note that each wall is a hand-crafted, unique work of art.

Guests can settle into luxurious comfort in staterooms and suites featuring plush bath towels and deluxe bed linens by Frette. Founded in 1860 in France and now based in Milan, Italy, Frette created custom-design bath towels and bed linens for the Disney Fantasy with what is regarded as the world’s finest cotton, from El Amria in Egypt. Elsewhere on Disney Fantasy, the two adult-exclusive restaurants, Palo and Remy, use all Frette dining linens.
AllEars.net 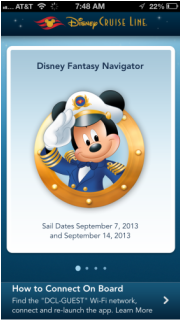 The Disney Cruise Line app will be a digital version of your Personal Navigator, with even more content. The app is not very useful shoreside, but once you get onboard the and join the wifi network the app will come alive. Use of this app is free as you are only using the internal ship Intranet via the DCL-Guest-Wi-Fi network, not accessing the Internet via the satellite connection. Just remember to put your iPhones in Airplane mode and turn on the WiFi to avoid any cellular data charges from your carrier. Seriously, triple check that your smartphone’s airplane mode turned ON, Disney Cruise Line is not and will not be responsible for any carrier charges.